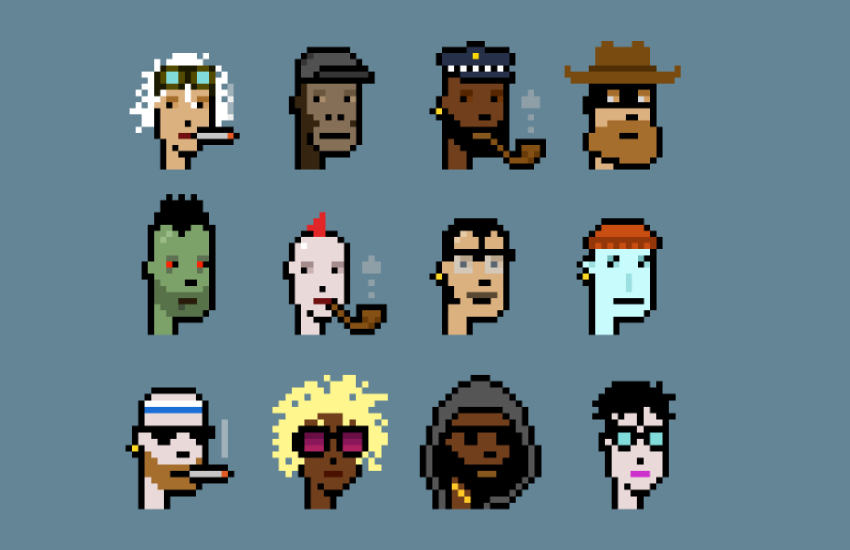 CryptoPunks is an innovative collection of non-fungible tokens (NFTs) that are pixelated and live on the Ethereum blockchain. Since 2017, the pixelated characters have made waves in finance, tech, and art. The pixelated characters are reputed to be the oldest NFT project. Although this claim is debatable, it is still a popular collection. These 8-bit, blockchain-based characters are currently being sold in auction houses all over the globe, fetching millions of dollars by an emerging breed of NFT enthusiasts as well as art collectors.

The sale of 9 CryptoPunks, valued at US$16.9million by Christie’s in the UK was announced on May 11, 2021 by the UK-based auction house Christie’s. This was the second largest NFT sale, after Beeple’s US$69million sale of Everydays: The first 500 days in March 2021. It was a lot of code and jpegs.

CryptoPunks was created in 2017 to be a revolutionary idea for digital asset ownership. It has since taken crypto, tech, and art by storm. This collection inspired the creation and use of the ERC-721 token-standard, which is now used by many of today’s NFTs. It has also helped to open the door for the CryptoArt era.

This guide examines the impact of CryptoPunks and explains how they can be bought and whether they make a good investment.

CryptoPunks can be created algorithmically. Some qualities are more rare and therefore more valuable than others. There are 11 CryptoPunks who look like aliens. Cryptopunk #7523 was the most expensive, selling for an astonishing US$11.7million in June 2021.

The CryptoPunks can be divided by type, and then subdivided according to attributes and accessories. There are five types of CryptoPunks: aliens, apes and zombies; men and women.

Since there are only eleven of these aliens, they are the most rare type. The next most rare species are 24 and 88 respectively, while zombies and apes are next at 88 and 84. The most common type of Punk is the human, with 3,840 female versions and 6,039 men.

The accessories and individual characteristics of CryptoPunks can also be subdivided. They can have anywhere from 0 to 7 unique items. A CryptoPunk without any attributes is a face that appears unadorned and bald. These bald punks are rare and valuable despite their simple appearance. There are only eight of them. Contrarily, only one punk has 7 attributes. He basically looks like a homeless man smoking a cigarette.

CryptoPunks is an online collection of 10,000 digital art pieces that are low-fi and unique. Each piece is an 8 bit, 24×24 pixels humanoid creature that has different algorithmically rendered features. NFT technology is used to verify each CryptoPunk’s ownership and rarity.

CryptoPunks take inspiration from the English punk scene’s golden age. They come in many forms. Some look human-like, while others have alien, zombie or monkey-like characteristics. Punks are also known for wearing accessories like hoodies, glasses and hats.

Two Canadian software developers based in New York, Matt Hall (who also makes up Larva Labs), started the CryptoPunks project in 2017. The project was an experiment in NFT and commoditization with blockchain technology. This experiment used NFT technology to create digital art.

All 10,000 of them are saved on the Ethereum blockchain, so no matter where or how they appear, it is impossible to duplicate. While their appearances may be duplicated, their underlying metadata is not.

CryptoPunks, along with their furry cousins CryptoKitties, are among the first pieces of cryptoart to be called CryptoArt. These are extremely collectible pieces that are starting to be sold in art markets and auction houses around the world.

How to Buy CryptoPunks NFTs

If you are looking to buy your CryptoPunk NFT, the first thing you need is an Ethereum wallet.

MetaMask is one of the most used wallets to interact with Ethereum-based apps. This wallet is often the best for buying and selling CryptoPunks. MetaMask Chrome extension can be installed or downloaded as a mobile wallet app.

Next, you will need to purchase some Ethereum to add to your MetaMask account. To pay for any transaction on the Ethereum network you will need some ETH. This means that sending a CryptoPunk is possible only if you have some ETH.

See also  Axie Infinity Review: Is It A P2E Game?

CryptoPunks can also be purchased on the Larva Labs base platform. However, you will need to make your payment in Ethereum. There are many options available for buying ETH. You can also get your ETH via your MetaMask wallet using a debit or credit card purchase. Once you have enough ETH, you can go to Larva Labs’ official CryptoPunks marketplace and start shopping. You will need enough ETH both to pay for the CryptoPunks you wish to purchase and to cover the gas fees associated with the ETH-denominated payment.

Wrapped versions of CryptoPunks can also be purchased on NFT marketplaces such as OpenSea. OpenSea will give you more choices in terms of the cryptocurrencies you can use to make your purchase. However, you will still need to have some ETH to pay for gas.

CryptoPunks has a 10,000 limit on the amount of CryptoPunks that can be created. This is one of its key benefits. Although this is similar to bitcoin’s 21 million coin limit, it is implemented in a very different way. CryptoPunks users must trust that the NFT collectible sets developers will not issue new CryptoPunks. It is possible that developers are motivated to keep their word. The promise of a limit on the supply of CryptoPunks, combined with the fact the collectible set was the first major NFT to be issued on Ethereum, has attracted a lot of attention over the past three- or four years.

CryptoPunks’ success is another advantage, especially in the early years. CryptoPunks has the highest NFT collector volume, surpassing NBA Top Shot. This feat is impressive when you consider that NBA Top Shots holds an official license from the National Basketball Association. Multiple CryptoPunks were sold for millions of Dollars, and Jay-Z even changed his Twitter profile picture so that it was a CryptoPunk.

One last benefit of CryptoPunks is that it remains true to the decentralization philosophy around cryptocurrency and blockchain technology. Larva Labs’ platform for buying and selling NFTs is completely uncustodial and works well with the well-known Ethereum wallet MetaMask.

CryptoPunks’ disadvantages are mostly due to issues that can arise from the decentralization dedication of the collectible group. It is still difficult to interact with a blockchain directly for the average citizen.

CryptoPunks’ use of Ethereum in 2021 has been particularly problematic, since the fees associated with using the blockchain network for NFTs processing tend to be higher than those of other platforms. CryptoPunks can be expensive, so transaction fees for buying them could end up being a rounding error. There are many people who prefer to use a custodial NFT platform such as NBA Top Shot. They don’t have to worry about managing their wallet or securely storing their private keys.

There is no easy way to buy and sell CryptoPunks using traditional payment rails like a credit card, PayPal, or bank transfer. Wrapped CryptoPunks made it possible to sell NFT collectibles on large NFT marketplaces such as OpenSea. It is still annoying that you need some Ethereum to pay for gas on Ethereum blockchains when purchasing a CryptoPunk.

Also, the NFT market in its entirety is still very new and uncertain if it will survive. CryptoPunks could end up being more like Beanie Babies than any collectible that has been able to hold its value for the long-term.

Where you can find CryptoPunks

The Most Expensive CryptoPunks

On March 11, 2021, the two most valuable CryptoPunks were sold. These were CryptoPunks #7804 & #3100. Each CryptoPunk sold for approximately $7.5 million in ETH. Larva Labs lists twelve of the most expensive CryptoPunks that were ever sold on its website.

It remains to be seen if CryptoPunks will maintain their value in the near future. Punks are currently a risky investment because there is no historical data. These digital collectibles, which currently cost 42 ETH each, are out of reach for most retail investors. CryptoPunks, despite their incredible rise in value, are an innovative experiment in art and will likely be remembered for their early use of NFT technology. They might be one of the most sought-after pieces in the future Metaverse, given their status as the first NFTs.